Summary of the Service with Commentary

The service described in this manuscript focuses on the commendatio animae (commendation of the soul) and the burial of the body. In Christianizing Death (Ithaca: Cornell University Press), Frederick Paxton describes the meaning behind the nature of these rituals: "The rhythmic repetition of [the] prayers helped to concentrate the minds of the participants on the ritual action. Their shared recitation created community, not only among the attendants but between them and those who had gone before them in sacred history" (119).

Although the preparations for the passage between worlds would have traditionally begun much earlier, with the care for the sick in the liminal space between death and life, we have no information on these rituals at the Brussels convent. The opening rubric does, however contain a reference to the Requiem mass, preceding the service around the coffin described in the manuscript.

The opening rubric of the service instructs the priest to remove his chasuble and, along with the ordained ministers and the sisters of the convent, to stand around the bier in a circle. The sisters are instructed to hold candles. A similar scene, although from a much later period and from a different location, is depicted in the image from Walters Manuscript W.168 below. The priest in these images is wearing the chasuble and thus perhaps these are demonstrations of another part of the death ritual, but the images nevertheless give a good visual representation of the manner in which the priest, nuns, and ministers stood around the coffin and communally prayed for the movement of the soul of the deceased from earth to heaven. 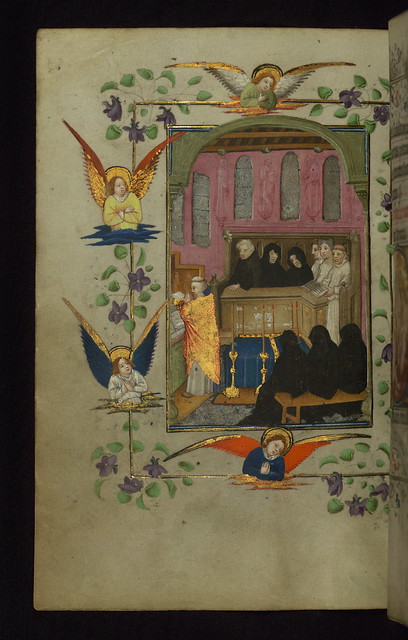 This Clarissan funeral service opens, as was customary, with the priest saying the prayer Non intres in judicium. As Frederick Paxton has remarked, this prayer portrays the salvation of the dead “as dependent not on anything… done while living, but on the fundamental ritual act of baptism" (222). This prayer, therefore, connects burial and birth. Following the prayer the responsory Subvenite Angeli is sung by the choir. During that time, the rites of absolution are performed: the priest sprinkles the body with holy water, receives the censer from the ministry and incenses the body. Then the cantrix and her choir intone the Kyrie eleison.

Following that, the priest begins the Lord’s Prayer, followed by Deus cui omnia vivunt, a prayer in which absolution is demanded for the soul. The cantrix and her choir begin the responsory Ne recorderis peccata mea, again asking for absolution, while the priest incenses the body. At the end of the responsory, the cantrix again intones the Kyrie three times and then the priest repeats the Lord’s prayer, followed by Fac quesumus. Then the responsory Libera me domine is sung, while the priest incenses the body anew. Again, after that we hear the cantrix intone Kyrie and following that the priest says the prayers Pater Noster and Absolve quesumus.

With this begins the procession. Since women traditionally did not physically help carry the body to the grave, the Franciscan brothers take the bier and carry the body to the grave, while the sisters sing the antiphons In paradysum and Chorus angelorum. When they have all arrived at the grave, the priest stands next to the grave and says the prayer Deus qui fundasti. Then he receives holy water and again sprinkles the body and the tomb after which he incenses both. Although the rite is never particularly stated in the manuscript, presumably at this point they begin the actual burial. A long series of standard antiphons alternating with psalms is begun:

Each antiphon is sung, followed by the accompanying psalm, after which the antiphon is repeated. For instance, Aperiti michi portas justicie is sung, followed by Psalm 117, Confitemini Domino. Then Aperiti michi is repeated before moving on to Ingrediar in locum and its related psalm. As Frederick Paxton has remarked, almost all of these psalms shift to the first person and ask for mercy through the voice of the dead, while the final set, Psalms 148, 149, and 150 move back to the third person in an exaltation of the powers of God. Following this process, the priest then says the prayers Ego sum and Benedictus dominus Deus Israhel.

When the body is buried, the antiphon Clementissime domine is sung. At the end the priest sprinkles the grave with holy water and incense and again says the Lord’s parayerand Satisfaciat tibi. Then is sung the responsory Memento mei, on a text from the Book of Job, reminding the participants in the ritual that "life is but wind." Following this, the procession leaves the gravesite and returns to the church. The priest says the Lord’s prayer and the prayer Tibi domine commendamus, which one last time confers the soul of the deceased to God and completes the ritual.